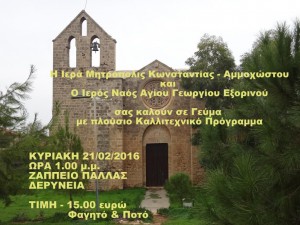 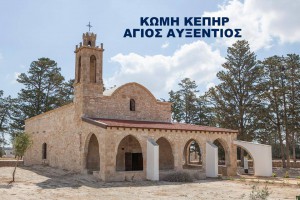 The Next Divine Liturgy in the Church of St. George (EXORINOU) in the walled city of Famagusta is ON Sunday 28/02/2016. 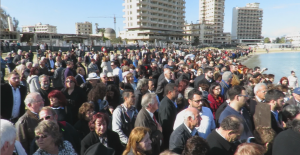 For the first time after 42 years the Epiphany Liturgy took place on the 6th of January 2016 at the St. George Exorinos Church within the walled city of Famagusta.

The Epiphany Liturgy headed by the  Archimandrite Avgoustinos Kkarras was attended by hundreds of Famagustian and other pilgrims who went to the occupied town of Famagusta for this purpose. After the Liturgy the people made their way to Famagusta beach by the Constantia Hotel, known as “Glossa” where, the Diving of the Holy Cross and the Consecration of the Waters took place. Many daring Famagustians defied the cold weather and dived into the clear blue waters of Famagusta to catch the Holy Cross and hence have its blessing. It is worth mentioning that the first person who plunged into the waters and managed to catch the Holy Cross was the last person who caught it when this religious custom took place on the same beach in January 1974, from the hands of the late President of the Republic of Cyprus, Archbishop Makarios III.

This was a very emotional moment for the more than 1200 people who attended and witnesed this ceremony aswell as the moment when the white pigeon which was freed by the Mayor of Famagusta Alexis Galanos sat on the head of a Famagusta woman. The wish of everyone who attended was that this is the first and the last time that this religious custom took place in occupied Famagusta and that next year this will take place in full grandeur in a free Famagusta and a Reunified Cyprus.

The event was co-organized by the Holy Bishoptry of Constantia and our group “Famagusta Our Town”.